During the preparation of the museum's opening exhibition in June 2004, it became clear that even though the flight in October 1943 was a world famous event, little had been collected to illustrate the experiences of the Danish Jews during exile in Sweden or the return home in 1945. Academic literature had primarily focused on the political maneuvers related to the roundup of the Danish Jews in October 1943, whereas only to a lesser degree had source materials been collected and historical works written about the people who directly suffered the consequences of the persecution of the Jews in Denmark. It was a natural responsibility for the Danish Jewish Museum to make up for this deficiency.

In 2007 the museum initiated a project on the wartime experiences of the Danish Jews 1943-1945, and to date this has strengthened the collections significantly with over 100 interviews, more than 100 three-dimensional objects, over 250 archival records and almost 900 pictures. The history of every single object has been carefully documented and registrered in the museum's registration system, and the collected materials have already resulted in a rising interest from researchers both at home and abroad. The materials can be more closely examined under the wartime collection on the homepage of the museum and in www.mussam.dk

The museum's project has furthermore resulted in the publication Nothing to Speak of - The Wartime Experiences of the Danish Jews by Sofie Lene Bak with an afterword by Bjarke Følner (2011). The English edition is distributed in the USA by The University of Chicago Press in cooperation with the Danish publisher, Museum Tusculanum. This publication has since been followed up by the museum's research anthology Dansk jødisk historie i Anden Verdenskrigs epoke (2011) [Danish Jewish history in the Second World War]. The project has also given rise to other publications, e.g. Sofie Lene Bak's Da krigen var forbi. De danske jøders hjemkomst efter besættelsen [When the war was over - The Danish Jews' return home after the occupation] (2012) and Kirsten Nilsson's De gemte børn. Beretninger fra Anden Verdenskrig [The hidden children. Accounts from the Second World War] (2012). The project has also given rise to a series of television programmes.

The museum has chosen to complete the project with the special exhibition HOME, which for the first time displays for the public selected items from the collected materials and is based on the project's thorough research. The materials from the museum's own collections have been supplemented with relevant loans from other museums.

Staff of the exhibition 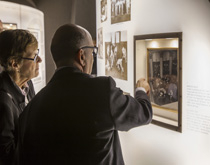 Acces from the Library Garden

You can acces the HOME exhibition directly from the Library Garden. It is wheelchair accessible and inside is a cloakroom. 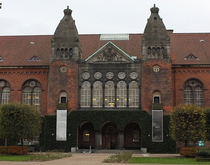 - an exhibition about Jews in Denmark

The exhibition is a broad story of Jewish life in Denmark and focuses on co-exixstence and indentity through 400 years. Read more...